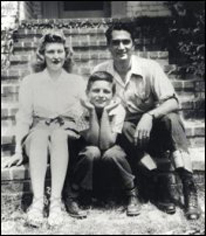 I was four years old, down by the East River in Manhattan, playing on a heap of trash with two boys about my age.  The play got rougher and one of the boys picked up an empty tin can and cocked his arm to hurl it at his brother. I was standing between them and playfully, with a deliberately comical air, I held up my hand and said, “Stop!” He didn’t stop and his arm uncocked and the can came hurtling toward me on the way to his sibling. As it came at me, time lost its speed and I saw the can revolving, the jagged edge of its lid, having been pried open with an old fashioned can opener, spinning like a circular saw through the air. It spun end over end and, on the way to its target, sliced through my scalp. I was almost immediately awash with blood. The scalp is a generous donor at times like this. Scared by the red Niagara pouring down my body, the boys escorted me home and handed me over to my mother. She brought me to the hospital and a couple of stitches later I was back home, thinking about what had happened.

Although we were staying at my grandmother’s brownstone house, where I was born, and the trash heap down by the river was only a couple of blocks away, I had led a life strangely sheltered from experiences like this.  My father was a singer and straight man in burlesque. As soon as I was born we were out on the road traveling from one town to another. My playmates were the comics and chorus girls in the traveling show. To me, being funny was more than a way to pass the day; it was a basic form of communication.

When I said, “Stop” on the trash heap, I was picturing myself in asketch. The violence would be no worse than the comic getting roughed up by the straight man in “The Crazy House” or “Slowly, I Turn,” sketches that made me giggle as I watched them from the wings. The ragged edge of the tin can cut through this fantasy as it cut through my scalp.

A few weeks later, I was sitting on the running board of a car next to a four year old girl. As I chatted with her, I must have said something offensive; possible a rude comedy line I’d heard from the wings, as I watched a burlesque sketch. Instead of laughing, the girl looked at me angrily. She glanced at her mother who was watching us a few feet away. “Hit him,” her mother said. Bang. I got a slap across my cheek. “Hit him again,” her mother said, and I got another crack across my face. This neighborhood was turning out to be a tough room to work in.

This was a long time ago and what might have been known  about childhood development by better educated and more sophisticated people was pretty much unknown to my parents. The innocence of youth would protect me, they thought, from the crudeness of our world. The chorus girls’ dressing room was my classroom, and the alley outside the theater was my Sesame Street.

Any step by step training in the real world that could have helped me deal with aggression, my own as well as that of others, was missing.  But we only have the start we have and we adapt based on what we have to work with.  I began to see that given the way the world worked and given my strengths and weaknesses, I had two choices. I was going to have to learn to become a much better fighter, or get a lot funnier. I went for funny.