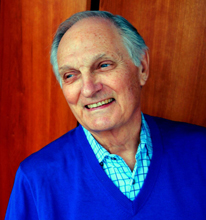 It takes exactly three minutes of my life and it happens most mornings. I scoop into a bowl some cold oatmeal that I’ve cooked in a huge pot at the beginning of the week and zap it in the microwave for three minutes. I know some people think oatmeal is boring, and I understand that my even mentioning the word will lock me in your mind as someone who is as boring as porridge itself, but this kind of thing interests me.

I’m condemned by some inner compulsion to think about the daily rituals of my life. I have a low grade fever for improving myself in many ways, including everyday tasks. This extends even to making oatmeal. I love oatmeal. To me it’s not boring. I agree that ordinary oatmeal is very boring, but not the steel-cut Irish kind -- the kind that pops in your mouth when you bite into it in little glorious bursts like a sort of gummy champagne. Unfortunately, it’s the kind that takes forty minutes to cook. But I love it so much that for months I was cooking it every morning while I read the paper. Then, following my insane habit of questioning everything I do to see if I can do it better, I had a eureka moment. What if I made a vat of the stuff every week? Would it still pop in my mouth if I stuck a bowlful of it in the microwave every morning? It did. And three minutes seemed like the perfect time to heat it.

So, there I was, setting the timer on the microwave every morning, and three minutes of my life would go by while molecules of moisture jumped around inside the oatmeal. Then, one morning, when the bell dinged and I opened the door to the oven, I was hit with a new wave of my unfortunate disease of self-improvement. It came in the form of a question: Where did those three minutes just go? There was something about knowing the timer was ticking off exactly 180 seconds every morning that suddenly jolted me. I waste plenty of time during the day. I play hundreds of games of chess against my computer and only beat it when it makes stupid mistakes, which is a complete waste of time. But the oatmeal part of my day is the only slice of time that gets counted to the second. And it’s unnerving. Where does it go? I was unexpectedly asking myself the great existential question that occurs to most of us at some point, and to which there’s no answer: If time is all we really have in life, how should we spend it?

Like all existential questions this is an annoying one. It seems to have pre-eminent importance because it is truly a question of life and death, but what are you supposed to do about it? Are you supposed to watch yourself every second? Putting on my shoes and socks, am I supposed to think: Wait, if I put on each shoe and tie the lace right after I put on each sock, I can save two seconds each morning that, in a lifetime, could add up to days. I could re-read War and Peace in that time. I’d become a better person, just by changing the order of getting into my footwear. That would be insane. By the way, I’ve timed it and it actually saves ten seconds. I could probably accumulate enough time before I die to squeeze in War and Peace and two self help books, but I’m not going to put my shoes on this way because I feel it would identify me as unnecessarily crazy.

So, here’s what I’ve decided to do. I’m going to think of those three minutes as play: a small vacation. A vacation is wasted time that doesn’t seem wasted because it has a name. So, I’ll name those three minutes Solitude. They will be my retreat, my morning Caribbean. I will float off into nothingness so that existence, when I return, will be even tastier.

Existence will pop to life like bubbles in a gummy champagne.